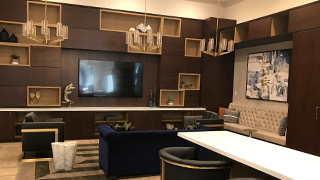 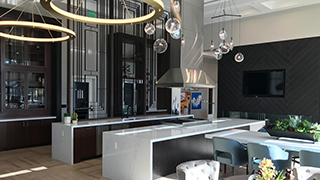 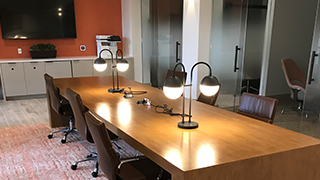 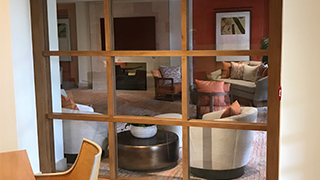 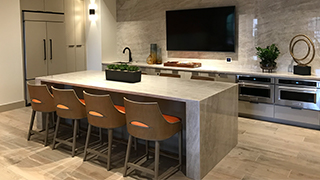 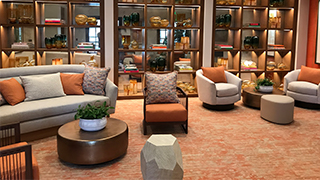 Married business partners and CABINET VISION users Ken Siegel and Christie Martin began their business 25 years ago in a garage, where humble origins were just the beginning of their company’s long tale of success.

“A lot of the projects we have will have multiple rooms with hundreds of parts, so having a way to keep everything organized makes keeping track of it so much easier,”

Based in Costa Mesa, California, CTM Woodworks is a high-end custom cabinetry and millwork business that primarily takes on projects in and around affluent Orange County. Having built a solid reputation on quality output with only word-of-mouth advertising, the company is in high demand from contactors and private homeowners alike.

“What we do is 90 percent commercial and on a large scale, with new single-family projects or remodels,” says Ken, who shares his office with the family’s dog, an affectionate black Labrador named Eli. “We’re successful because we put out a good product and have decent people who work for us — people who care about what they’re doing.”

Upscale, multi-family apartment complexes are the most common of CTM’s projects, and these include highly custom amenities such as clubhouses, lounges, spacious offices, and reception areas. Custom desks, built-ins, media centers, soffits, wall units, and even staircases are part of the company’s repertoire. “Everything that we do is custom, whether it’s commercial work or for a private home. We never do 30 of anything; it’s typically just one.”

In the early 2000s, the company implemented the CABINET VISION design-to-manufacturing solution to simplify the job-planning process. They used the solution to generate parts lists, cut lists and assembly sheets, which significantly reduced error and time devoted to planning.

“The reason I initially got CABINET VISION is that I was drawing plans by hand and then giving them to my guys, who had to break down the parts, cut the parts and make the cabinets. It took too long and it wasn’t accurate.”

In 2017, CTM purchased a CNC router and upgraded its software to the CABINET VISION Screen-to-Machine™ (S2M) Center, which revolutionized the shop’s manufacturing process. The S2M Center makes it simple to generate NC code based on project design and send that code to the shop floor.

“I can go to the S2M and watch it break down the parts into sheets in five minutes,” Ken says. “I can hit ‘optimize’ and it tells me how many of each panel I need, shows me how to cut it, and even puts in construction holes for me. If I want an adjustable shelf, it will automatically put the holes in.”

Ken sees a stark contrast between the amount of stress shouldered by his five-man crew before and after the implementation of the software and CNC router, for which CABINET VISION generates G-code at the click of a button.

“The machine and software absolutely changed how we’re able to operate. It’s allowed us to do more work with the same amount of people, and also reduces the amount of stress on the guys who had to figure out how to cut all of this stuff,” he says. “We couldn’t understand what it would do until we had it, and how it would change the dynamic of the company — and we didn’t even have to change our construction methods.”

“It conformed to us,” adds Foreman Rory McKeever, who has been with CTM for 15 years. “Every part was cut on a saw before the router came. Not only does the new system save my back, but I’m able to multitask and build things instead of spending all of my time on the saw. We can do more work, and the quality is the same.

“Frankly, I was intimidated by the thought of a CNC at first, but we went to a couple of different shops and saw them in action, and we knew it was the right direction for us.”

Ken handles the lion’s share of CTM’s design and programming duties with CABINET VISION by utilizing the solution’s user-friendly design tools and subsequently applying toolpath to completed designs. The system makes the most of time already invested in programming jobs by allowing users to save processes to a library. This means that finished programs can be edited or used as-is for new projects of similar or identical design.

Ken appreciates that CABINET VISION allows him to make project changes — such as adjustments in materials — that affect the dimensions of whole projects without having to change each job parameter. CABINET VISION automatically adjusts entire designs to reflect the smallest of changes, which saves hours of time that would otherwise be devoted to reconfiguring whole projects by hand.

The solution’s dynamic rendering tools are especially popular with homeowners, Ken says, as it helps them to visualize the final results of their remodels or new construction projects. “Especially when I’ve had projects with private homeowners, they love it if I can show them a three-dimensional view.”

Integrating the software and CNC machinery has added up to significant time savings and fewer headaches at CTM, where 80 percent of the company’s work has moved from the saw to the router. Being able to program the software to ensure that the grain matches on assemblies is one such benefit, while another is the generation of clear assembly instructions for staff.

“A lot of the projects we have will have multiple rooms with hundreds of parts, so having a way to keep everything organized makes keeping track of it so much easier,”

Ken, who will soon implement a labeling system in CABINET VISION for even greater ease in tracking parts through the shop. “There was nothing wrong with the way we were doing it before, but we couldn’t have kept going like that, especially if we wanted to handle even more work.”

Ken and Christie have never shied away from challenges, and the implementation of new technologies is one that they were ready to “jump right into,” says Siegel. After all, CTM did begin in a garage, where Christie kicked off the business with work on refacing projects for local property companies. It wasn’t long before the pair, who had met as art students in college, received their first requests for cabinetry jobs.