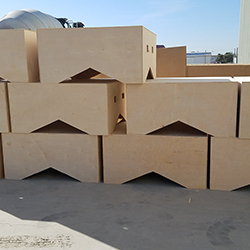 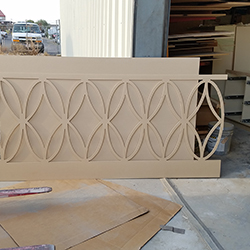 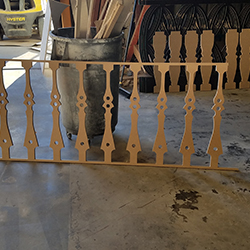 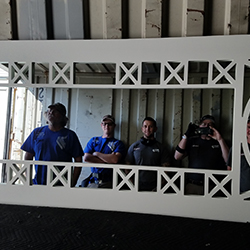 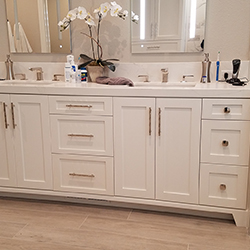 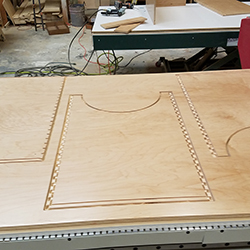 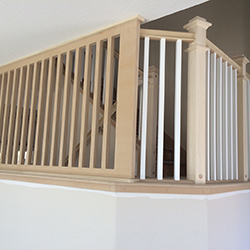 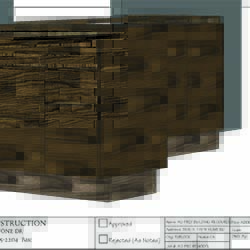 As the son and grandson of carpenters, Rob Jones was practically born to be a woodworker — a profession that, as he tells it, entails “spending the first couple of years learning how to do it and the rest of your life fixing your mistakes.”

Characteristically down-to-Earth and passionate about his work, Jones has owned Stair Systems of Modesto, California, for 27 years. Highly custom projects, including complex millwork, are par for the course at Stair Systems, which, as its name suggests, builds at least one thing that most of its competition does not.

“We go from the lowest end to the highest end, and we offer some services that other companies don’t — including stairs,” says Jones. In addition to stairs, the shop builds cabinets, interior trim, such as wainscoting and molding, custom millwork, and some light furniture.

“I realize that there is so much that I can do with the machine and the software, and that two or three guys can make as much as 10 guys with CNC.”

Despite his steady success, Jones knew that he’d need to evolve to remain on top of his game and implemented CNC machinery and software in 2017. “I made the decision that, if we were going to keep doing cabinets, we would have to do them in a competitive way — and that’s with CNC machinery  and software,” Jones says. “If you don’t go with CNC in this industry, I believe that in the next 10 years you won’t be in business.”

After researching his options, Jones purchased the CABINET VISION Screen-to-Machine™ (S2M) Center and the ALPHACAM computer-aided-manufacturing (CAM) solution. Once he understood how to harness the new power at his fingertips, Jones significantly increased his production.

“I realize that there is so much that I can do with the machine and the software, and that two or three guys can make as much as 10 guys with CNC,” says Jones, who initially had reservations about making drastic changes to his production process.

“Less than 12 months ago, the machine and software landed on my floor at the shop, and we got Internet for the first time at the shop,” he says. “We never used any software up to that point to make our products. We were very nervous and intimidated by this strange contraption that we now had, and we had to continue our work load and find a way to change at the same time. Every day, driving to work, I had this anxiety and I didn’t know if I was really afraid or super excited. My 25-year veteran quit during this process and we pressed on without him.”

Ryan Wolfe, who joined Stair Systems in 2017, is familiar with CABINET VISION and will become increasingly productive with the software once the shop has a network license. Network licenses allow multiple users to work on the same jobs and easily share information, which streamlines work flow and eliminates duplicating tasks.

“With the CNC, you can have three projects going at once,” Wolfe says. “When the machine is running, that’s like having another person here.” He finds CABINET VISION especially helpful in visually communicating job details, which is ideal when working with staff who are still learning the trade. The system helps Austyn Allum, who is new to woodworking and has been with the company for just a few months, easily grasp job details and understand construction methods.

“What’s nice is I can get in there and look at how Rob assembled something, or see aesthetically what he’s trying to achieve,” Wolfe says. “He can tell me what he wants and I can build it in my mind, but now I can actually pull it up and show Austyn what it will look like — and the whole team can get together and pull it up visually.”

To begin a job in CABINET VISION, the dimensions of the room in which the project will be installed are typically entered into the system manually. However, Jones went a step further after purchasing the two solutions and acquired the Leica Disto S910, a laser distance-measuring tool by Leica Geosystems that is linked with CABINET VISION.

The direct link between the Leica S910 and CABINET VISION allows Jones to take room measurements that are then imported into the software. Following import, CABINET VISION generates room layouts based on the data. “It does 3D point-to-point measuring and gives you the layout of the whole room,” Jones says. “The measuring software generates a full 3D rendering and makes it so much easier.”

As all projects begin with sales, being able to visually represent the job can make all the difference when dealing with customers. Jones, who works with a mixture of contractors, architects and homeowners, uses CABINET VISION to showcase the final result.

“I usually try to sit in the room with them with my laptop and draw them something in CABINET VISION,” Jones says. “If you can visually show somebody something quickly, and with honesty, you’re probably going to get the job quickly. We’re all very visual; that’s when they pull the trigger, because they want to actually see these things.”

Jones tackles his projects with a combination of CABINET VISION and ALPHACAM, with the former used for cabinetry jobs and the latter for jobs that require the production of complex profiles.

For instance, Jones recently programmed 200 linear feet of wainscoting with complicated cutouts in ALPHACAM, and also used the solution to produce a set of mirrored barn doors in MDF that feature intricate cutouts. Each door is two pieces — front and back — glued together, with dadoes cut into the back to hold the mirrors, and cutouts in the front partially overlaying the mirrors.

While Stair Systems produces goods in a range of qualities, American-made plywood and dovetail drawer boxes are company production standards, from low-end to high-end.

“All drawer boxes are now dovetails because it’s so easy to do with CABINET VISION. I can make dovetail drawer boxes that are up to four feet by eight feet,” Jones says. “CABINET VISION is so good you can easily take it to the low level or to the highest level, and it allows you to be very specialized. The software is like an open set of doors and, if you walk through those doors, you can do anything.”

CABINET VISION enables Jones to save his projects and completely reuse them, or reuse elements of existing projects without having to redraw them. The solution includes a library that is helpful for both automating and standardizing certain job elements, as well as for eliminating repetitive tasks. “The project is always in the system, which makes it easier to make changes and allows you to reduce costs.”

Likewise, CABINET VISION’s parametric capabilities enable Jones to pull designs from his library, apply them to new jobs, and easily adjust them for size. Parametric functions are especially useful for jobs that are similar or identical in every aspect except for size. “I can make a dovetail drawer in any size because it’s parametric and, because CABINET VISION is controlling every portion of the part, the final cut is perfectly square. I can’t create that with a table saw. When I put the drawer in a cabinet, it’s perfectly flush — and I never see that.”

Jones uses CABINET VISION’s nesting engine to maximize material yield, and has created a material schedule to easily manage his offerings.  He also uses the system’s “grain-match” function, which ensures that parts are cut, such as stacked cabinet doors, with coordinating grain. Next on Jones’s list is to start using CABINET VISION for his bids.

“I really want to start using the bid feature to take the emotion out of quoting,” he says. “A lot of times we bid emotionally, when we think we really need a job, but this will let me know exactly what it will cost to do the job.”

Jones doesn’t know how much time he’s saved by implementing CNC machinery and software because he’s also implemented new standards. “I don’t know how long all of this would take me without the CABINET VISION because I couldn’t repeat this without it,” he says. “There is just absolutely no comparison.”

With his fears alleviated and nearly a year of experience in CNC production under his belt, Jones has the confidence to further increase output.

“Now we’re going to take the machinery and software and double what we did this first year,” Jones says. “I used the resources made available to me through Vero Software to learn a new way. I relied on their people and services to navigate my way through uncharted waters.

“One of the biggest fears a cabinet maker has is starting over with a completely new process. We all know how to make cabinets, but to let go and trust the process sometimes feels like I’m being untrue to my craft or leaving something that works well. Today I can tell you that the decision to switch has been the decision that is true to my craft.”

“I realize that there is so much that I can do with the machine and the software, and that two or three guys can make as much as 10 guys with CNC.”